Tashina Clarridge was born in 1982 at Burnt Ranch, California. Her brother Tristan Clarridge entered the world four years later. Their mother Jan played the guitar. The family lived in a re-mote part of Northern California in a tipi on the side of a mountain. The sounds of nature, rather than city sounds, shaped their early musical ears. They never attended a day of traditional school but began music lessons at age two. Their moth-er drove them thousands of miles to music camps and lessons and led them on three week backpacking trips. The photos below show Tris-tan competing as a little guy and Tashina with her fiddle in 1984.
In a recent phone conversation, Tristan and Tashina shared their early fiddling and Weiser experiences. As early as age two, they had fiddles. By the time Tristan was four and Tashina was eight, they were commuting two hours to Redding for lessons with baroque violin/fiddle instructor Rob Diggins and with Megan Lynch (highlighted in the previous NOTF newsletter). Megan, who they met at a Blue Lakes fiddle contest, suggested they go to Weiser. And so in June, 1991 they loaded the family car, drove to Weiser and set up their tent. ​ 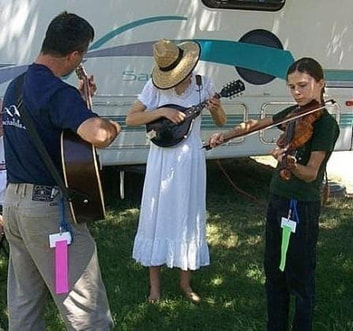 Tashina and Tristan jamming at Weiser with guitarist John Relph.
Tashina and Tristan recall being amazed at the scene. A vivid memory from that first trip was be-ing awakened around 3am by their mother so they could listen to an astounding jam session involving Mark O'Connor and Oklahoma's Monte Gaylord. They didn't get back to bed until the sun rose. Tashina also recalls the horror of finding that on the drive to Weiser, a stick of butter had melted on the beautiful long white dress she had picked out to wear at the competition. Eventually they graduated from a tent to pick-up camper.
The Clarridges missed Weiser in 1992 but have attended every year since. In 1994 Tashina won the Junior-Junior Division at Weiser and in 1995 Tristan won the Small Fry Division. Tashina en-tered the Grand Champion Division starting in 1995. Tristan joined Tashina in the Grand Cham-pion Division in 2000. Tashina won the Grand Championship in 2005. Tristan won an astound-ing five times (2002-4, 2006 and 2008), an achievement matched only by Herman Johnson and Tony Ludiker.
These photos show Tristan accepting the 2003 grand champi-onship and Tashina's 2005 Weiser championship photo.
Tristan and Tashina each have gone on to national prominence in the American roots music scene. Tashina has toured with Mark O'Connor, Tony Trischka and Laurie Lewis and has per-formed at Carnegie Hall as part of MacArthur Fellow Grammy-winning bassist Edgar Meyer. Tristan switched to cello in the pioneering bluegrass-new folk sensation Crooked Still and has toured with Mike Marshall, Bruce Molsky and Cape Breton fiddle phenomenon Natalie Macmaster. Recently, Tristan (cello) and Tashina (fiddle) teamed with dulcimer wizard Simon Chrisman to form the acclaimed trio The Bee Eaters (photo below). The Clarridges have taught at countless workshops and co-founded the Mt. Shasta Music Summit, now in its 9th year. The Summit is revered as a musical and social melting pot where students and professional musicians can come together, bonded by the interconnectedness of music, community and culture. 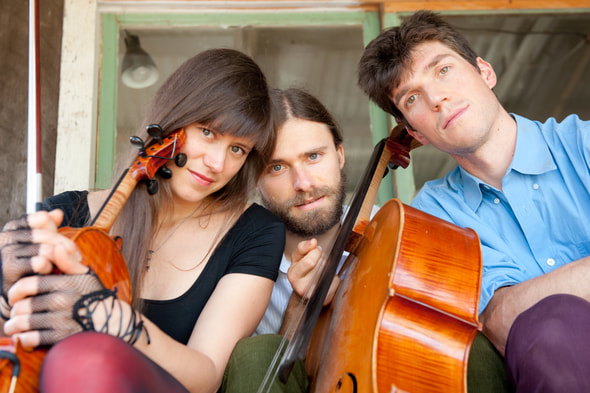 In reflecting on the thirty five years since they first came to Weiser, Tashina and Tristan offered some interesting observa-tions. The thrill of competing against some of the greatest fid-dlers in the world undeniably and the biographical enhance-
ment of being a National Old Time Fiddle Contest are certainly important. But they say that the strong sense of musical com-munity that makes them drop their busy professional careers icfor a week and draws them back to Weiser year after year, decade after decade. Tristan says the contest per se certainly is a strong facilitator in encouraging disciplined practice and the opportunity to play as well as possible. But strong tradition of reconnecting with old friends in a family-friendly environment and participating in incredible jam scenes are paramount. Both Tashina and Tristan say that for many years, Weiser was the biggest thing in their musical lives. Tashina stated that often she spends more time listening to incredible musicians such as Matt and Danita Hartz, Paul Anastosio, Texas Shorty and Tony Ludiker than playing her fiddle.
Tashina also made an interesting observation about an apparent dichotomy in fiddling at Weiser, in that the art of the great musicianship is distinct from the art of competition. The two of course are not musically exclusive, but recognizing the difference is essential for a well- rounded musician.
In looking to the future, Tashina and Tristan agree that ''youth is the future". NOTF should redouble its efforts to bring young fiddlers not just into the fiddle contest but into the larger musical community at Weiser. They also opined that diversity and spontaneity of interpretation in musical selections at the contest are important. And that older musicians need to reinforce the concept that winning isn't everything. The pleasure of playing and participating in the comradery of the larger Weiser scene is more important. Youngsters need to dare to join in jam sessions and develop as musicians in ways beyond pure competition. Tashina mentioned the famous old time music festival at Clifftop, West Virginia where virtually every campsite had jams going constantly involving musicians of all levels of ability. ​