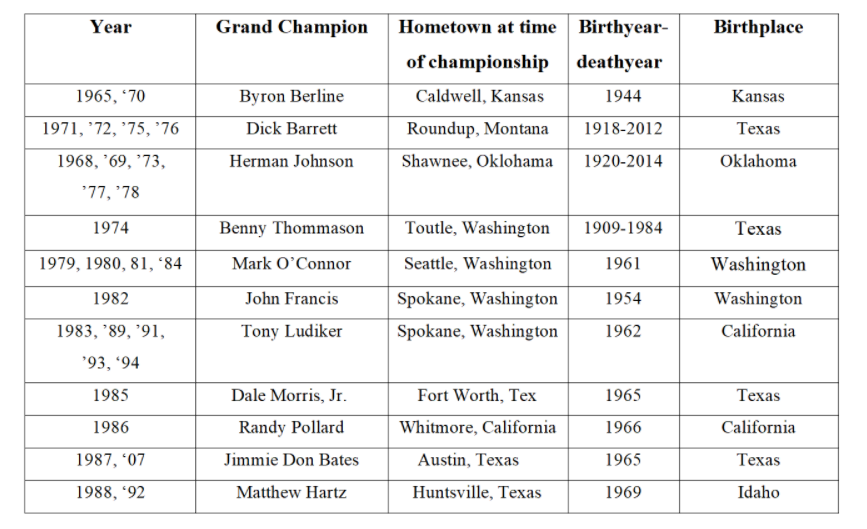 ​Byron Berline’s arrival in 1965 anticipated the shift to Texas fiddling at the Weiser contest. He and legends Dick Barrett, Herman Johnson and Benny Thomason cemented the change with their sweep of the top contests from 1968 through 1978. Since 1968, every Weiser grand champion has competed Texas style.
Biographies of Dick Barrett (above left) and Herman Johnson (above right) are available on the internet, as is the bio of Benny Thommason. In the preceding NOTF newsletter, we highlighted Byron Berline. It must have been quite an experience to compete against such masters of the genre.
A lasting generational shift occurred in 1979 when Seattle-born Mark O’Connor (below right, 1979), a young protegé of revered Texas style fiddler Benny Thommason (below left, 1974), hit Weiser like a Chinook wind. Mark’s grand championships in 1979, ’80, ’81 and ’84 set the mold for almost every Weiser grand champion thereafter. With few exceptions, from then on every grand champion was from west of the Rocky Mountains, first won in his or her teens or twenties and had classical violin training. Mark went on to become an internationally renowned multi instrumentalist (guitar, mandolin, violin) in diverse genres ranging from country to classical and jazz and a celebrated composer and educator. One of his classical compositions became one of the most performed concertos written in the last forty years and he has won two Grammy awards. His discography and performance record is stunning. However, from the National Old Time Fiddle Contest perspective, his greatest impact was inspiring young fiddlers from the far American west to compete against and dominate older generation fiddlers from Texas and Oklahoma.

While every Weiser champion in the 1970s and 1980s had impact in the musical world far beyond Weiser or contest fiddling in general, and deserves to have their biographies presented in this article, space limitations only allow us to highlight two who have returned to Weiser almost every year since the early 1980s.
Tony Ludiker is a five time National Old Time Fiddle Contest grand champion and three time runner-up, including a triumph in 1983 over Mark O’Connor. Only Herman Johnson and Tristan Clarridge have won the grand championship five times.  Tony also won countless other fiddle contests, including the 2013 adult division championship at Weiser. He was born in California in 1962 and raised in Washington state. In the fifth grade, he started taking fiddle and classical violin lessons. Tony started competing when he was twelve and first came to Weiser in 1976, where he finished sixth in the junior division and second in the junior-junior group. The photo below shows Tony at Weiser in 1983 championship photo and more recently with the Flying W Wranglers.
​In 2002, Tony returned to classical music, playing in a string trio and serving as concertmaster of the Coeur dAlene Symphony and Chamber Orchestra. This job included a tour of South Korea as part of a piano quintet and a concert in Spokane with Rod Stewart. In January 2006, Tony moved to Colorado Springs to work with the famous Flying W Wranglers, the  second-oldest (after Sons of the Pioneers) western singing group. This job caused him to miss the Weiser fiddler contest for the first time in thirty years. Unfortunately, in early 2012 Tony was diagnosed with stage four kidney cancer and had one kidney removed. Then in June, the devastating Waldo Canyon Fire destroyed the beloved Flying W Ranch. Tony relocated to Los Angeles to play with the Doo-Wah Riders, a long standing nationally touring country band. Unfortunately, the recurrence of inoperable cancer caused him to return to a slower paced life in Colorado, where he now teaches, rehairs bows and plays occasionally with the Doo-Wahs. Over the years, Tony also played fiddle for musical giants ranging from Ray Price to Rod Stewart.
Tony’s grown children are carrying on the family fiddle tradition. Dennis and Kimber have won countless contests over the years. Kimber won the Weiser grand championship in 2009 and 2010 and now is a Nashville-based musician, touring with her nationally prominent bluegrass band Della Mae. Dennis plays professionally with the Austin, Texas band Milk Drive and has been Winfield champion, World Champion and three times Texas State champion.
Breathtakingly talented fiddlers won at Weiser in the 1970s and 1980s in categories other than the grand championship and went on to spectacular careers in music. Stellar Weiser fiddlers who made a lasting mark nationally include Nashville based Barbara Lamb and Luke Bulla, California based J’Anna Jacoby and Jana Jae (originally from the Weiser area and now in Oklahoma).
Next we will highlight Megan Lynch Chowning article.