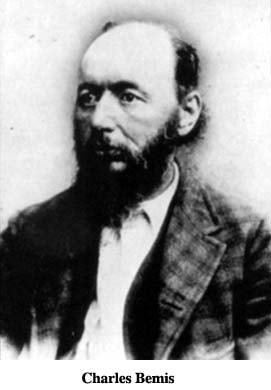 Charles Bemis was born in 1848 and came to the gold mining camp of Warrens, Idaho from Connecticut with his father in 1865. He preferred gambling to placer mining, and soon bought a saloon. A competing saloon/dance hall/gambling house was owned by Hong King, who was the husband or master of Lalu Nathoy, the now famous Chinese slave girl known as Polly. When Hong King died in the middle or late 1870's Polly moved in with Charles. By the mid 1880's he monopolized the saloon business in Warrens and was also working as deputy sheriff. In 1890 Charles was shot in the face, and Polly nursed him back to health. They married in 1894, despite the fact that such an inter-racial marriage was illegal at the time. However, the Justice of the Peace who married them, Amasa "Pony" Smead, could not have objected too strongly, since he himself was married to an Indian woman, which was also illegal! Charles and Polly moved to a farm 17 miles away on the Salmon River. Charles still owned the saloon, continued to play occasional dances in Warrens, and sold produce from the farm. He died in 1922; Polly died in 1933.

He was one of the fiddlers in the dance orchestra formed by Peter Beemer in the late 1860's. The other members of the band included another fiddler (Rube Bessey), Peter Beemer on the flute, a banjo player, and an accordion player. Beemer wrote down 124 tunes for the orchestra to play for dances.

For the dances in Warrens, Charles Bemis's saloon, which normally offered "Pure Whiskey, Wines, Liquors and Cigars," was converted to a dance hall. So that respectable ladies could attend, the bar was closed and covered with a canvas, the pictures were turned to the walls, the tables and chairs were stacked out of the way, and smoking or drinking were forbidden. On a typical Saturday night seventy-five to a hundred people would attend, about five men to each woman. At midnight the ladies served a buffet supper, after which the dancing resumed and might continue until dawn. This was a typical pattern for community dances in pioneer settlements.

Reuben Bessey was the other fiddler in the dance band that played at Charles Bemis's saloon. He was born in Massachusetts in 1816. He was a member of the James Warren party who first discovered gold at Warren's Diggins. When Bemis was shot in 1890, Bessey ran the saloon for him until he recovered. Over the years Bessey played violin for dances with several musical ensembles. He is buried in the cemetery on the hill above Warren. 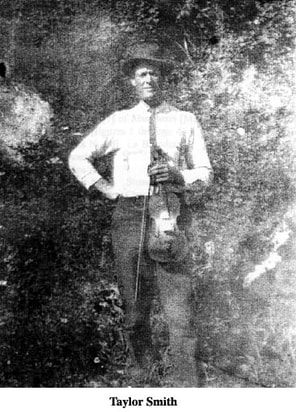 In 1893 Charles Bemis and his wife Polly (a famous Idaho historical figure in her own right) took 12-year-old Taylor Smith into their home. Charles taught Taylor how to play the violin, and eventually gave the Peter Beemer manuscript to him. Taylor played dances from it for many years. In 1961 he allowed the Idaho Historical Society to make a microfilm copy, and wrote a brief history for them, in which he wrote that he also played dances from this manuscript.

He also played horn; with his sister on reed organ and his nephew on violin, he played dances in the Warrens area in the early 20th century.

Charles Barnard was an itinerant violin teacher who played and taught in various Idaho mining camps in the 1860's, including Florence, Warrens, Lewiston, and Idaho City.

John Kelly was an itinerant violinist who entertained in various Boise Basin mining camps in the 1860's. His troupe, "Kelly's Varieties," supplied "Singing, and Dancing, Negro Extravaganzies by an unrivalled Troupe of Performers." The Boise News of November 28, 1863, said that "John Kelly is too well known all over the coast to need an introduction." Former Governor William McConnell described Kelly as "an artist with the bow who had no equal in that day. . . He commanded a salary second to none and was engaged in the largest gambling resort in Idaho City." To protect himself and his violin in the rowdy surroundings in which he performed, he devised a hanging stage, above the heads of the patrons on the main floor, with a ladder which he would pull up after himself.

According to the Idaho Historical Society, "Idaho gold camps had their share of actors and musicians in the 1860's and 1870's. A perennial favorite in southern Idaho was an Irish violinist, John Kelly, whose renditions of such popular airs as 'Old Dog Tray' and 'Write a Letter to My Mother' alternated with the heavier strains of Bach and Beethoven. The versatile maestro also sang popular ballads to his own accompaniment. Whenever Kelly performed in Idaho, he drew capacity crowds. One concert in Boise merited the newspaper opinion that Kelly's performance was 'the most fashionable entertainment ever given in this city.' Kelly's popularity was enhanced by the antics of Willie, his traveling partner and co-performer between 1863 and the early 1870's. Everyone in southern Idaho knew the story of that Snake Indian lad. Early in the spring of 1863 Jeff Standifer and fifty Indian fighters from Boise Basin had organized a volunteer expedition to punish a Snake band which was raising havoc with the gold rush. After one of the battles, the volunteers, so records one chronicler, found Willie nursing at the breast of his dead mother who was killed in the action. Standifer rounded up the surviving Indians, including Willie, and took them back to Boise Basin. Some of the prisoners were farmed out as cheap, but intransigent, laborers. Willie found himself in more pleasant surroundings. He was given to John Kelly, who was on a Basin tour at the time. The Snake Indian boy surprised everyone by quickly adapting to his new surroundings. Kelly taught the youngster to play the fiddle and to tumble and turn in the fashion popular with gymnasts of the period. Within a few months Willie had joined the act. He was "supposed to be the greatest contortionist of his age living," wrote a Boise newspaper editor. During the next few years Kelly and his Indian companion performed for audiences all over the country. Even Europe knew of the famous duet, for Kelly and Willie toured the violinist's native Ireland early in the 1870's. It was while in Ireland, however, that tragedy ended the friendship. Willie took ill and died, and John Kelly returned to America with a heavy heart. Neither he nor his audiences soon forgot the Snake Indian acrobat."

Sanburn Schottische was probably written by Jay Rand Sanburn, a gold miner, near Florence in 1862. Sanburn Schottische is one of the earliest tunes written within present day Idaho that can clearly be attributed to a specific writer. We have not confirmed yet that he played the fiddle.

When Idaho County was organized with its seat at Florence in 1862, Sanburn was the county clerk. In 1888 Sanburn became a state legislator. His collection of curios and minerals was purchased by the University of Idaho in 1901.

"HON. JAY RAND SANBURN. The life of this well known business man has been full of varied experiences and activities on the frontier, and in it all he has shown forth the real pioneer spirit, ever manifesting therewith integrity, capability, and faithfulness. Jay R. was born in Illinois, on May 12, 1833, being the son of early pioneers of that state, and at Knoxville he was educated. At the age of twelve he started in life for himself, and the first venture was to learn the harness maker's trade and saddlery. He followed this for five years and then took up the printing business in which he also became proficient. Four years after that, he came across the plains, driving five yoke of oxen all the way. He landed in Trinity county, California, and the same winter went into the butcher business. He mined and sold goods until 1858, then went to Frazer river in British Columbia, where he visited the Cariboo mines. In 1860, he went to Orofino, the next year to Florence and in 1862, he was in Boise basin. California was the destination again in 1864, and in 1870 we find him engaged on the locks at Oregon City. Returning again to California, he worked for six years in the Turkish baths there. Then he came to Shoshone county, and in 1890, he traveled to Coeur d'Alene. In 1890, he was appointed receiver to the United States land office in that city and for four years we find him in faithful discharge of the duties of that incumbency. Since that time until 1899, Mr. Sanburn has been engaged in various lines of business and in the year last mentioned he retired from the more active walks of life to enjoy the competence which his skill and labor have accumulated for him. However, he is still interested in mining and has some good properties.

"Politically, Mr. Sanburn had always been an ardent Republican until 1896, when he voted for Bryan and since has been a Socialist. He voted for A. Lincoln and every Republican candidate until the one mentioned. In 1888, Mr. Sanburn was elected as representative to the state legislature from Kootenai and Shoshone counties. It has always been the lot of the subject of this sketch to sail his bark on the more placid waters of celibacy and he is now enjoying the golden years of his life in this line and is highly esteemed by all being one of the influential and substantial men of our county." (Illustrated History) 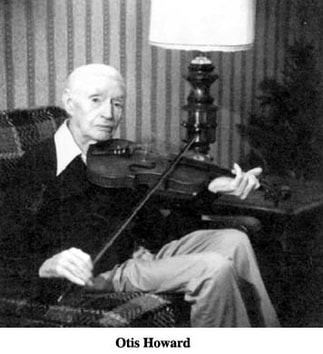 Otis Howard was born in Fort Collins, Colorado and named after General Otis Howard of Civil War and Indian War fame. His parents were originally from Indiana, and they migrated to Pine, Idaho, on the South Fork of the Boise River, in 1899. His father, uncle, four brothers, and two sisters all played fiddle or 5-string banjo. Otis helped his father drive freight wagons to and from the Atlanta and Rocky Bar mines, and later drove stagecoaches between Mountain Home and Atlanta. Later he worked in the mines, shoring timber and working on the Featherville gold dredge, and also worked in ranching, logging, and farming. He played dances in the area, and played banjo and steel guitar as well as fiddle.

Source:
Idaho Old Time Fiddling by Otis Howard. CD from tape recorded in 1963, Slim Chance Music, Nampa ID, 2009.
Census information for Idaho is at Idaho USGenWeb Archives at http://usgwarchives.org/id/idfiles.htm
Compiled by Vivian Williams in her list of 19th century fiddlers in the Pacific Northwest, along with whatever information is available about their lives and the tunes they played. www.voyagerrecords.com/arNWFiddlers.htm
​Vivian Williams recording her excellent Voyager release, "Winter Moon."